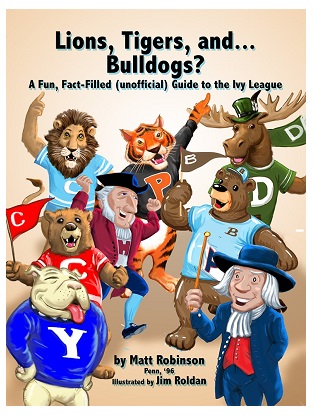 Please join us on Saturday, 14 September from 2:00 PM - 4:00 PM as we celebrate the launch of, Lions. Tigers, & ... Bulldogs An Unofficial Guide to the Legends & Lore of the Ivy League by Matt Robinson.

Penn alumnus Matt Robinson (CAS ’96) has long had a “thing” for mascots.

“I will never forget going to the Brown-Harvard football games as a kid with my father,” Robinson recalls. “The game was never all that great, but I was captivated by the bear!”

For many years, Robinson dreamed of following his father to Brown and becoming the Ivy League University’s mascot.

“I just loved how he (or she) just ran around and acted crazy, hidden inside the giant bear head so nobody knew who he (or she) was,” Robinson explains.

After graduating high school, Robinson ended up following another path, but the love of the Brown Bear and other mascots stuck with him- so much so that, when it came time for the 20-year journalist to write his first book, the choice of topic was easy!

“I had seen books in which one of the BIG 10, PAC-12 or SEC mascots take you on tours of their campuses,” Robinson recalls, “but I had never seen anything like that for the Ivy League. As I went to Penn, my wife to Dartmouth, my dad to Brown, etc., I already had familiarity with many of these schools, so I decided to write the book that I could not find.”

The result is Lions, Tigers, and…Bulldogs?: An unofficial guide to the legend and lore of the Ivy League (Fighting Quaker). In this book, Robinson presents many stories and legends about the Ivy League, including how the schools were selected, how the name came to be, etc. There is also a special section dedicated to Ivy League athletics. The book then visits each of the “Ancient Eight” campuses and offers select facts about the people, places, and traditions that have made them so special, important, and impressive for so long.

Robinson explains that, though the idea had been in his mind for many years, he had always put it aside when a new writing assignment came across the transom. When his father was diagnosed with dementia in 2015, Robinson made a vow to the man who had introduced him to the Ivy League in the first place.

“I promised my dad that the book would see the light of day,” Robinson recalls, “even if it meant turning down other work.”

So even if you do not know what a Whiffenpoof is, why “Dartmouth College” is a misnomer, why Penn students throw toast during football games, what military vehicle has been named for Princeton, that the original Brown mascot was a burro, how Cornell, Campbell’s soup, and the chicken nugget are related, what Pantone color “Columbia Blue” is, or that the statue in Harvard yard is NOT John Harvard, Matt Robinson has a handy guide that is perfect for alumni, recent graduates, students, sports fans, history buffs, and anyone who enjoys learning things about people in costume.

Matt Robinson has published over 5,000 pieces in more than 200 international publications and taught at various schools and universities. He has also created marketing campaigns and other materials for individuals and institutions.

This feature require that you enable JavaScript in your browser.
END_OF_DOCUMENT_TOKEN_TO_BE_REPLACED

This feature require that you enable JavaScript in your browser.
END_OF_DOCUMENT_TOKEN_TO_BE_REPLACED