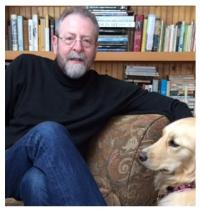 Jeffrey will be here Saturday, March 7 between 1 and 3 PM to meet customers and sign copies of his book, Live to the Network, the latest in his Ethan Benson series.

Spinning toward a devastating confrontation with his boss, the mercurial anchorman of The Weekly Reporter, Ethan Benson stumbles upon a story about the tabloid murders of three runaway girls that have dominated the headlines in New York City. At first, the assignment appears to be just another lurid crime story that Ethan has no interest in pursuing, but as he launches his investigation digging up the police reports, securing the court records, meeting with confidential sources, and staking out some of the most crime-infested neighborhoods in the city, he discovers that the murders are just the tip of the iceberg, that the dead girls represent the last chapter in a despicable world, where women are degraded in the most inhumane of ways. Peppered with car chases, gun battles, and contract hit men, Ethan takes the reader on a wild ride of payoffs, corruption, and deceit as he discovers the devious link between an assistant district attorney and the head of the Chinese mob in Lower Manhattan, whose clandestine alliance compromises a law enforcement task force investigating the crimes. A thriller in the classic sense of the term, Live to the Network brings the reader into the mysterious world of television news with all the infighting and backstabbing endemic to the real world of broadcasting. An unforgettable character, Ethan Benson is an award-winning senior producer, a hero, husband, father, and raging alcoholic who's driven by inner demons to discover the truth and tell the story behind the story. The novel is a classic murder mystery with love and violence, surprise and suspense, and a cast of unforgettable characters set in a milieu rarely explored in other works of fiction.

Live to the Network (Paperback)

This feature require that you enable JavaScript in your browser.
END_OF_DOCUMENT_TOKEN_TO_BE_REPLACED

This feature require that you enable JavaScript in your browser.
END_OF_DOCUMENT_TOKEN_TO_BE_REPLACED