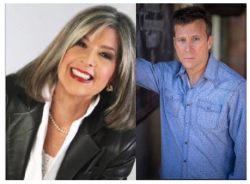 The stars aligned and two great friends, Hank Phillippi Ryan & Steven Cooper will be here together on Saturday night, September 28th at 6pm.

Please join us as Hank & Steven discuss & answer questions about their newest books, The Murder List and Valley of Shadows.

The Murder List is a new standalone suspense novel in the tradition of Lisa Scottoline and B. A. Paris from award-winning author and reporter Hank Phillippi Ryan.

"An exhilarating thrill ride that keeps you turning pages...Ryan deftly delivers a denouement as shocking as it is satisfying."--Liv Constantine, bestselling author of The Last Mrs. Parrish and The Last Time I Saw You

Law student Rachel North will tell you, without hesitation, what she knows to be true. She's smart, she’s a hard worker, she does the right thing, she’s successfully married to a faithful and devoted husband, a lion of Boston's defense bar, and her internship with the Boston DA's office is her ticket to a successful future.

And in this cat and mouse game--the battle for justice becomes a battle for survival.

About Valley of Shadows

A cop. A psychic. And a dead socialite. Who killed Viveca Canning and where is the Dali masterpiece that hung on the walls of her estate? So many people had a motive. Phoenix Detective Alex Mills is on the case with the help of his sometimes-psychic buddy Gus Parker. You won’t find another duo like them. And once you hop on the wild ride, you won’t want to get off. Who will survive a doomed flight over the Pacific? Who tried to blow up an art gallery? Who saw Viveca Canning as a threat and shot her twice in the head? Those questions hound Gus and Alex as the case unravels. It’s an art caper wrapped in a murder mystery. The Valley of the Sun becomes a Valley of Shadows, where everyone has something to hide and the truth lies beneath Phoenix in a labyrinth of tunnels and dungeons.

There’s a lot at stake for Gus and Alex. With the case swirling all around them, the future of Gus and his rock n’ roll girlfriend hangs in the balance. For Alex, it’s a test of family loyalties as a health scare for his wife brings him to the breaking point.

Cooper’s style is, at once, scorching and wry. He deftly and seamlessly mixes thrills and chills with snark and wit. There’s good and evil, love and despair, compassion, deceit, and danger. The action swerves around twists and turns and collides with a cast of characters you will not soon forget.

This feature require that you enable JavaScript in your browser.
END_OF_DOCUMENT_TOKEN_TO_BE_REPLACED

This feature require that you enable JavaScript in your browser.
END_OF_DOCUMENT_TOKEN_TO_BE_REPLACED